I often get questions from folks who live in cloudy climates about the feasibility of solar power.  My typical answer is that we live in a location that is about as cloudy as possible in the winter.  Combine that with the very short winter days that come in a northern latitude and it's a recipe for solar failure.  Or so it would seem.

It doesn't get much worse than our location during the winter (at least from a solar power perspective).  But in spite of that, we and many others use solar power as our primary charging source.

There are 3 main strategies for making solar power work during cloudy winters.

Here's a quick snippet from my full training course Off Grid Boot Camp that explains these in detail:

This is the ideal option.  It's also the most expensive--especially in very cloudy northern areas.  What you end up with is a solar system that is grossly oversized for 3/4 of the year in order to handle the winter.  Be aware that there may be a few times when you might need to supplement with an alternate power source.  An example would be when you are socked in with heavy snow clouds for a week or more.  But for the most part, your solar array should produce everything you need to live comfortably.  This is true as long as you designed your power system properly (as we teach in Off Grid Boot Camp).

So, if you can afford this option, then go for it!  But just be careful to do your system design carefully and use good weather data, or you might end up a bit disappointed.  And it never hurts to install more solar power than you need.

On top of all that, while you may find some appliances to use less power in the winter (freezer in the garage, etc), some will use more power during the winter.  During the short winter days, you'll be using more lights for more hours every day.  And depending on your source of heat, it might be using some power for a fan (even many wood stoves have a fan for additional heat production).

As you can see, it could be challenging to make much of a dent in your power usage, so I don't recommend relying on this option entirely.

#3 - Size solar system for spring, summer & fall and supplement with an alternate power source in winter

This is the route that we and others have chosen to go due to finances.  It would be expensive to set up a solar array large enough to entirely power our daily living in the dead of winter.  So our array is large enough for powering our home 8-10 months out of the year.  During those really dark 2-3 months, we supplement with a fuel-powered generator. 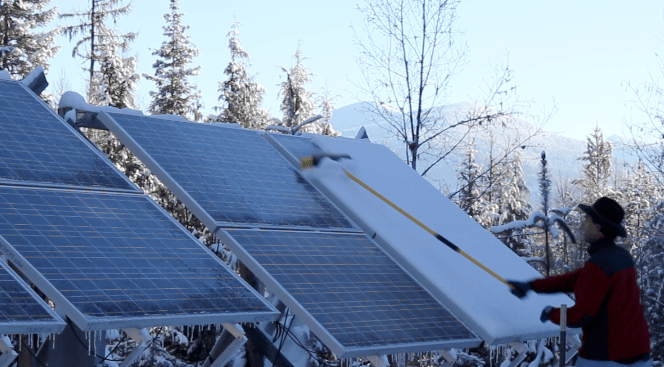 How do you get all that snow off the solar panels?  Is it a lot of work?  Actually, it's pretty easy.

Many times our solar array shed the snow itself.  You see, in the winter you want your solar panels to be tilted in a more vertical pitch.  This places it perpendicular to the rays of the sun's winter position--low in the southern horizon.  An added benefit is that your solar array can now shed much of its own snow.

There are times when snow freezes to the array and it's not coming off until the next sunny day.  In that case, I may choose to clear the snow off manually.  This way, I don't miss out on the passive solar radiation coming through the clouds.

For clearing the snow, I've found a push broom with soft bristles to work quite well.  Mine even has a rubber blade on the back that is useful for bumping stubborn ice off the array without scratching the glass.  Be sure to install an extra long handle that may be extended for reaching the highest panels in the array.  I've also heard of folks using a squeegee attached to a long handle.  Just don't get too carried away with the snow removal.  If you remove most of it, the sun will generally finish the job before too long.

You might be wondering how to do all this if your solar array is on your roof.  Good question.  That's one of several reasons why I don't recommend putting your solar array on your roof.  Your only options are to risk your life brushing snow off the panels, or else you could wait for a warm sunny day to melt the snow off.  Also, roof-mounted solar panels are more likely to trap snow at the bottom--preventing it from sliding off, even if it is warm and sunny enough to do so otherwise.

Yes, it is very feasible to use solar power even in cloudy climates.  But here's a bit of advice from years of experience.  Don't be a "purist" about solar power.  It is not a sin to supplement with another power source when it's exceptionally cloudy.  Roll with the punches and do what works.  But I think you'll find the low maintenance advantages of solar panels to more than outweigh their disadvantages--especially with the costs as low as they are.

Do you have any solar power tips or questions - especially for cloudy climates?