Our Favorite LED Light for Off Grid

We finally found light bulbs we could get excited about! CFL's work, but there's some drawbacks that we weren't really excited about. Recently we were walking through Home Depot and you'll never guess what we discovered... LED home light bulbs!

Incandescent light bulbs are out of the question.  Not that our renewable energy system couldn't handle them in the summer time when the solar panels are pumping out tons of power.  It's for the dark and short winter days and also for the principle of the matter.  Incandescents waste around 90% of the power used.  Most of the energy is turned into heat rather than light.

So for years we used compact fluorescent lights (CFL).  But they have some drawbacks as well, such as mercury inside (probably not a problem unless you break it, but still unnerving).  For a while I have felt that LED lights were the way to go, but they were so expensive, were not very bright, and most bulbs were so directional for flood applications...until now! 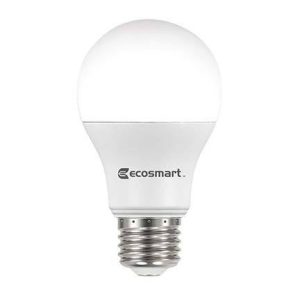 LEDs Are So Nice!

After much shopping and some trials, we found our light bulb.  The Ecosmart daylight white A19.  The box says it is 60 watt equivalent but we find it to be much brighter in reality and like it way better than a 100 watt CFL.  The color is such pure white!  And power usage is just 13 watts!  Not a huge amount less than comparable CFL, but every little bit helps.  Cost is still a little steep, at $26, but better than prices used to be.  So we are trying to pick up one new LED bulb each time we go to Home Depot.