Diary of a Blessed Garden - Our Story Of Thanksgiving

NOTE FROM NICK:  My family has SO much to be thankful for this Thanksgiving.  It has been a tragic year for us.  But its also been a year of miraculous preservation and recovery.

As my Mom describes in today's post, my Dad's life hung by a thread after a terrible car accident.  But after his phenomenal recovery, we realized that even though God takes care of the big things, He also looks after the little things.  Things like Mom and Dad's garden, which was neglected during those hot & dry weeks in the hospital.

While we are giving thanks for this story that has such a wonderful ending, I have done a lot of thinking about the times when the outcome is very different.

We realize that life on this earth doesn't always turn out the way we would choose.  Not everyone survives a bad car accident as my Dad did.  Sometimes we deal with terrible consequences from bad decisions that we have made.  But other times it was simply out of our control, and we struggle with "Why".

I wish I could explain "why" every bad thing happens on this earth, but I can't.  If we could explain all these terrible things, perhaps we would end up trying to justify them--and I don't believe there is any justification or explanation for evil.

So, what do we do when the outcome is grim?  When faced with disappointing circumstances that we are unable to fix or explain, I think it helps to look back on the past and remember those special moments...the ones where Heaven came near to touch this earth and work a mighty deliverance in our behalf.  These experiences give us the courage to face times when life is hard.  And they teach us that even though bad things happen to good people, God is working to somehow turn each disaster into a blessing--if we will only let Him do it.

But when a tragic story has a wonderful outcome, you simply have to rejoice in it and give thanks!  It reminds us that the Lord still reigns, and His hand still intervenes in the affairs of men--even the little things... 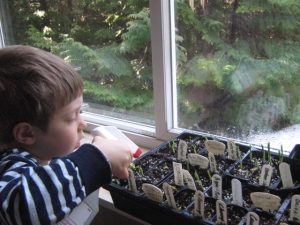 What a story I have to tell about our garden this year! It all began back in early April when we returned from our spring seminar trip--Craig built a 12" deep window sill below our triple window in our cabin's living area where I could start my garden seedlings. Immediately I began planting my favorite non-GMO seeds in trays and placed them on the windowsill. They sprouted very quickly!

However, because they weren't getting enough hours of sun in that location, they weren't thriving. The weather outside was warm and sunny, so I made the decision to go ahead and plant the small seedlings into our garden much earlier than usual, along with a few larger plants that I purchased at our local farmers' market. 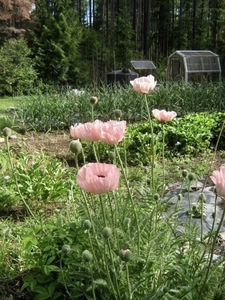 I covered much of the garden beds with black plastic in which I had cut holes for each seedling--and here I planted the small tomato plants, butter peas, limas, broccoli, cucumbers, summer squash, peppers & eggplants. The black plastic helps to warm up the soil and keep it warm during the cold spring nights, and it also helps to conserve water and direct the water to the plants' roots.

In mid-June, I was so pleased as our garden was already coming along very well and it looked wonderful (as you can see in the photo).

And then...a few days later, our lives turned upside down! 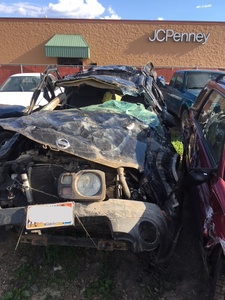 There wasn't much left of the SUV. His life was hanging by a thread!

Craig was in a very bad car accident and was very severely injured. He was taken first to one hospital, airlifted to another--where he spent time in intensive care, was transferred from there to the floor--then was transferred to an acute rehab hospital. Just the fact that he lived was miraculous, and his recovery was equally phenomenal, for which we give God all the credit! Needless to say, I was by his side night and day...

More than six weeks went by before we were able to return to our place--I had no idea whether our garden would survive, as the weather during much of that time was so hot and dry. Normally I water our garden faithfully every few days during that type of weather, but it just wasn't possible this year! Some dear friends watered our garden twice (picked and preserved lots of our strawberries too!), and a couple of family members also were so kind--they watered a few more times during those 6+ weeks. 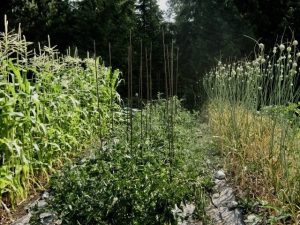 August 7 - We returned home to this beautifully preserved garden

Here's what our garden looked like after we got home! (photo) It had not only survived--but it had actually thrived (including weeds!) during the time we were away!

We have no simple explanation--but we believe that God used our simple human effort (planting extra early in the spring, using black plastic, etc.), and then when we were in a crisis situation where we couldn't continue that human effort...He blessed us with some help from family and friends...but in reality, it was very clear to us that our Heavenly Father just opened those windows of heaven and poured out His abundant blessings on our garden & orchard during this extremity! 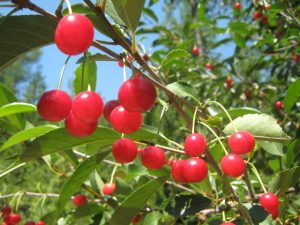 Our faithful hummingbird sentries had been on duty, protecting the cherries.

There's more...He sent an extra blessing!!! Just before the accident, our Montmorency cherries were just starting to ripen. I had placed a hummingbird feeder in each tree. As we explain in our seminars, the hummingbirds will not eat the cherries, but they are so territorial that they will protect their "territory" from the larger birds--they won't allow them to eat the ripe cherries! I had filled the feeders in mid-June, most likely a few days before Craig's accident. Typically, once the hummingbirds find the feeders they will empty them in less than a week, at which time the feeders will need to be refilled. But in this case, we weren't able to refill them, because we were gone for over 6 weeks. When we got back home in August, our cherry trees were just loaded with bright red, fully ripe cherries! The feeders had probably been empty for weeks, yet it appeared that no cherries had been eaten by birds! How was this possible??? All I know--as I was picking the ripe cherries, suddenly I'd hear a buzzing noise, and precious little hummingbirds would fly up close to me, zipping around and back and forth! I believe that God gave those wonderful tiny little guys the job of "protecting" our cherries while we were gone, even though the feeders were empty for many weeks...until we were able to get home and tend to the cherries ourselves! What a wonderful heavenly Father! While He was taking care of the BIG things (saving Craig's life and healing his injuries), He was also caring for the LITTLE things, including our garden & orchard!

But the biggest miracle by far was Craig!  In spite of breaking his neck in multiple places, sustaining major head wounds, and losing 3 liters of blood, he has made a full recovery.  As far as we know, he has sustained no long term injury.  And no paralysis (which at C1/C2 where his fractures were, would have impacted his diaphragm)!  And now he is even out of the cervical brace.  He is undergoing physical therapy to increase his range of motion after being in that brace for months.  In fact, we are planning our next cross country seminar trip for Feb-April of next year.

Yes, we have so much to be thankful for this year!

Snow Plowing For Newbies
I quit!