Oregano - The Herb For This Season

Hearing much of that lately?  Bless you… or Gesundheit!

Sneezing is actually one of the body's defense mechanisms against airborne pathogens (translation: cold and flu bugs that float around in the air). The force of the sneeze expels those nasty little ‘bugs’ and sends them on their way… hopefully.

But just in case, we like to jump right in and help support our bodies defense system. It’s called the Immune system, and it’s an amazing network of many different little ‘good guys’ that work hard to protect us. But sometimes we need a little ‘help’ to support that amazing defense system.

Let me introduce you to one of our friends: Oregano Oil

I actually have a little bit of a Love/Hate relationship with Oregano. I don’t like the smell. Honestly. Maybe you do, but I don’t. It’s pretty strong, especially when you get some really pure, really potent stuff (like what I use). But I’ll have to admit, the stuff just plain works, and works well. Here’s a little bit about Oregano Oil. 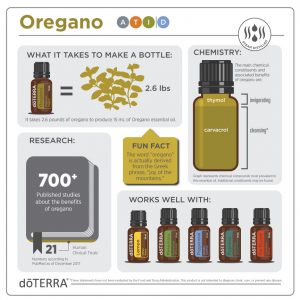 Due to its high concentration of carvacol and thymol, two phenol chemicals that possess cleansing properties, Oregano is commonly used as a household cleansing agent.

Oregano oil can be taken internally to help support a healthy immune system, healthy digestion, and respiratory function. Also, it just happens to be an excellent source of antioxidants.

As you are probably aware, MRSA has become a serious issue, especially in hospital settings.  A 2008 study looked at the susceptibility of MRSA to Oregano Oil.  Here is what the researchers had to say:  "In conclusion, the findings of the present study indicate that oregano oil, in addition to other properties, has potential as a topical antibacterial agent against MRS strains." (source -PubMed abstract or full text)

In a recent (2018) study, researchers compared the effect of Oregano essential oil with conventional antibiotic treatment for acne.  Here was their conclusion:  "Oregano, the most effective EO [essential oil], was formulated and tested as a nanoemulsion in an acne animal mouse model. The formulation showed superior healing and antimicrobial effects compared to the reference antibiotic. Collectively, our data suggested that oregano oil nanoemulsion is a potential natural and effective alternative for treating acne and overcoming the emerging antibiotic resistance."  (source)

Other benefits of Oregano oil can be found when preparing and eating culinary dishes. Oregano’s herbaceous flavoring can be added to appetizers, entrees, and sauces to enhance an array of savory meals.

Oregano oil is incredibly powerful and there has been a tremendous amount of research done on this topic.  Here are some household uses as well as studies that have been conducted with Oregano, testing it's potential as a treatment for various conditions.

For a quick and easy household cleaner, put 10 drops of Oregano essential oil into a spray bottle with 1 cup of water and 1 cup of vinegar. Due to Oregano’s chemical makeup, Oregano oil is a powerful cleansing and purifying agent. This simple spray is great for surfaces and countertops. But you really have to like the smell!

When we feel our immune system needs extra support, we like to apply diluted Oregano Oil to the bottoms of our feet.  10 ml roller bottles work very nicely for this. We put 20-30 drops of Oregano into a 10 ml roller bottle, then top off with fractionated coconut oil or olive oil.  This is roughly 7-10% dilution.  If a skin test proves that this is too strong for you, try backing off to 5% (15 drops) or even 3% (9 drops).  Mix thoroughly. Then apply to the bottoms of your feet, put on socks and head to bed!

One drop taken daily can help maintain healthy immune function. Oregano can be taken more frequently when seasonal threats are high or as needed to further boost immunity. You can also put two drops of Oregano essential oil in a veggie capsule, then add a carrier oil, such as coconut or olive oil. Then close the capsule and swallow right away to help support immune function.

Oregano Oil is powerful stuff!  That's a wonderful thing if used properly.  But it can also have negative effects if you use it carelessly.

Because of Oregano oil’s high phenol content, caution should be taken when diffusing or inhaling—only one to two drops are needed.

When applied topically, Oregano Oil must be diluted with a carrier oil such as fractionated coconut oil.  The percentage of dilution is a topic of much debate.  Some experts advocate diluting so heavily that it's hardly there, and others endorse as little dilution as possible.  We personally take a middle of the road position on dilution.

We believe that each person is different, each condition is different, and the goal for each usage of the essential oil is different as well.  So each of these things must be taken into account.  For a "hot" oil like Oregano, our practice is to dilute at 5-10% for topical application on tough skin like the bottoms of feet.  For use elsewhere, we might dilute it a little more, such as 2-5%.  But honestly, feet are the primary location that we use Oregano, due to the strong smell :-).

One good practice when using a new oil for the first time is to do a skin test.  Try a little of the particular oil (at the dilution you are using) on a small area of skin such as the inside of the elbow.  Wait several hours to see if there are any signs of irritation or sensitivity.  If symptoms appear, dilute the oil more heavily.  If even a heavily diluted portion causes irritation or sensitivity, it may be that you should avoid that particular oil.  Once again, everyone's body is different and you need to listen to what it's telling you.  Contrary to popular opinion, it has been proven that rashes from the application of oils are generally NOT a sign of the body detoxing.

If you happen to get Oregano Oil on any sensitive areas of skin, or if you happen to experience skin sensitivity, you'll want to "cut" it with a carrier oil.  Liberally apply a carrier oil such as Coconut Oil or a vegetable oil on the affected area.  DO NOT use water, as this will make the experience worse.  Believe it or not, using oil on the affected area will bring the most relief in the shortest period of time.

When using essential oils like Oregano, we've found a huge difference between a pure high-quality oil and the "cheapos" that you find at chain stores.

Previously, we had used run-of-the-mill Oregano Oil under our tongue.  Nick would even do an entire dropper full--undiluted!

Then we discovered "real" essential oils and got ahold of a bottle of doTERRA Oregano Oil.  I tried 1 drop of it under my tongue...BIG MISTAKE!  The power of it nearly knocked me off my feet!  Later on we discovered that Oregano Oil is a "hot" oil and should always be diluted.  But it demonstrated to us the dramatic difference between "100% pure" Oregano from a cheap company versus doTERRA's Oregano.  It was like night and day!

In addition, the purity issue is critical.  In so many oils, you have no idea how pure it is and what other constituents are added.  Those unknown substances can affect your health.

If you need repeatable results, you need to know that each bottle will be the same--time after time.  And that's a priority with doTERRA essential oils.  In fact...

doTERRA oils go through a battery of tests, including 3rd party tests that are made public to you.  Each bottle of oil contains a tracking number that you can use to download the lab test results from that particular lot of oil.  Talk about transparency!

So if you'd like to get ahold of the finest Oregano Oil in the industry, go here to get it individually.  I recommend starting out with one of their excellent kits that are seriously discounted and come with a free membership for a wholesale discount.  Here are our 2 favorite kits.  And if you sign up through one of our links, you'll also get the help and support of our team in learning how to use your oils safely and effectively.

Any Questions Or Comments?

Lemon Oil - Swiss Army Knife Of Oils
Non-Toxic Cleaners for a Healthy Homestead
How We Use Charcoal At Our Homestead
Smoked Out? Here's My #1 Favorite Off Grid Air Purifier
Stomach Bugs & The Most Embarrassing Day Of My Life