Where I Get My Garden Seeds

Its that time of the year... Spring fever. And its also time to start planning the garden and choosing which seeds to start.

If you haven't already done so--NOW IS definitely THE TIME to order seeds for this summer's garden!   We all need to learn to collect seeds each fall from our current garden plants (if they are Heirloom seeds). But whether or not you did that in the fall, there are doubtless new varieties that we all want to try out.

Also, if you feel intimidated about starting your own seeds, just give it a try. It's SO easy and WAY cheaper than going out and buying all the plants. If you are on a tight budget try making your own seed pots like we did one year. It was easy and super cheap. Learn about it in our blog post called Newspaper Planter Pots.

First we need to talk about about kind of seeds you want to use. Be sure you use non-GMO, heirloom seeds. So, what exactly is an heirloom? "In sharp contrast to hybrids, Heirlooms trace their ancestry back many years to a time when pesticides and herbicides were not in use. As Jere Gettle, the owner of Baker Creek Heirloom Seed Co. puts it, “Basically, an Heirloom seed is one that has been passed down through families and is usually considered to be over 50 years old. Some varieties even date back to Thomas Jefferson’s garden and beyond.” Unlike hybrids or GMO’s which often have problems reproducing to the parent strain, Heirloom seeds can be saved and replanted, ensuring a trustworthy supply of family food year after year." Source

What does non-GMO mean? "A Genetically Modified Organism (GMO) results from a discipline called Genetic Engineering. It involves taking genes from one species and inserting them into another. For example, genes from an arctic flounder which has "antifreeze" properties may be spliced into a tomato to prevent frost damage. It is impossible to guide the insertion of the new gene. This can lead to unpredictable effects. Also, genes do not work in isolation but in highly complex relationships which are still not fully understood. Any change to the DNA at any point will affect it throughout its length in ways scientists cannot predict. The claim by some that they can is both arrogant and untrue." Source

Where To Get Seeds? 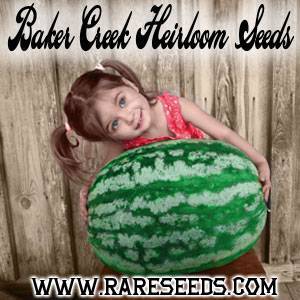 My favorite company to get seeds from is Baker Creek Seed Company (www.rareseeds.com).  You can write or call for a catalog: (Baker Creek Seed Company, 2278 Baker Creek Rd., Mansfield, MO 65704 ~ (417)-924-8917).  Another really great company is the White Oak Valley Farm. I like to use almost exclusively heirloom seeds. The reason is that if I am unable to purchase seeds the next year I can collect seeds from this years garden for next year. It's sustainable that way and I so can continue to grow the basic foods that our family enjoys!

There is an almost endless supply of heirloom tomatoes. It's fun to read about each type as you decide which ones you want to try in your garden.  Last fall we went by Baker Creek and I chose some new varieties that I'm anxious to try out. One is called "Paul Robeson", a Russian variety, and another is the "Cherokee Purple", an old Indian heirloom.  Both are reputed to have superb flavor!  I've seen heirloom tomatoes for sale at fresh produce places for $5.99/lb!  Why not grow them for next to nothing, and then I can use these wonderfully tasting tomatoes not only for fresh eating, but also in my canned salsa, my spaghetti sauce and just plain canned tomatoes!

Last summer we had a bumper crop of heirloom tomatoes of many varieties, and most of our tomato plants were just heavy-laden with treasures!  Now, in cold, snowy, cloudy December, January, February, & March--we are enjoying a taste of the sunkissed days of last summer every time we open a jar of delicious homemade salsa!

What Are You Going To Plant?

Just think about the basic foods your family needs from season to season, year to year.  Everyone's taste and list will be different, but we would probably agree that some of the basic heirloom varieties that would be good to have in your garden are:  tomatoes, lettuce (try the "Tom Thumb" variety for a real treat!), onions, beans (don't forget soybeans--if you'd like to be able to make your own tofu, dressings & milk!), beets, cauliflower, broccoli, carrots, cabbage (I'm trying a new variety called "Glory of Enkhuizen"), peas, corn, cucumbers (don't forget the pickling cukes!), eggplant, peppers, greens, melons, squash, & herbs like basil and cilantro!

If you're like me, you'll soon get carried away...you might even start day-dreaming of sunny, warm "bluebird" days; sweet, earthy smells as you get your hands into the soil, muscles awakening from winter hibernation, and the melodies of God's little soloists coming from the forest to encourage and give hope for an abundant harvest!